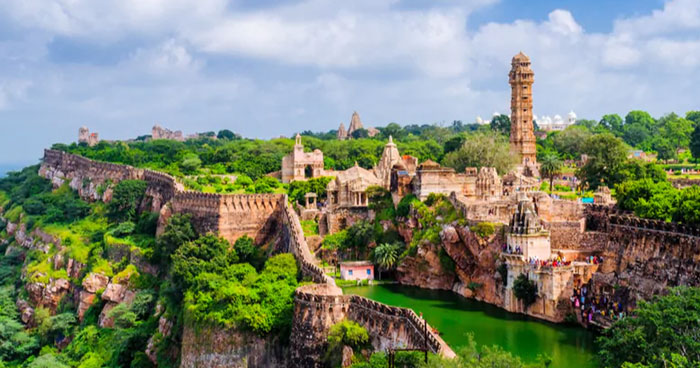 Chittorgarh Day Trip After arrival in Udaipur you will be received by our representative at your desired place in Udaipur and further drive straight for excursion tour to Chittorgarh.

Chittorgarh:Chittorgarh is the epitome of Rajput pride, romance and spirit. It reverberates with history of heroism and sacrifice, which is evident as it echoes with the tales sung by the Bards of Rajasthan. The main reason for visiting Chittorgarh is its massive hilltop fort, which is a depiction of Rajput culture and values. The fort stands on a 240-hectares site on an 180m high hill that rises rapidly from the plains below.

Thrice a stronger enemy sacked Chittorgarh. The first sack occurred in 1303 when a Pathan King Ala-ud-din Khilji overwhelmed by the beauty of Queen Padmini besieged the fort in order to capture the regal beauty. In 1535 Bahadur Shah the Sultan of Gujarat besieged the fort causing immense carnage and it is said that 32000 men donned the saffron robes of martyrdom and rode out to face a certain death, and the women folkes committed Jauhar (an act of self immolations by plunging in a large fire) led by Rani Karnawati. In 1568 Mughal Emperor Akbar razed the fort to the rubble and once again the history repeated itself. In 1616 Mughal emperor Jehangir restored the fort to the Rajput but it was not resettled. Today a new township sprawls below the hill on the west side. Chittorgarh is connected by both bus and rail. The bus stand and the railway are located in the new township.

Chittorgarh Fort is a massive structure with a 1 kilometre zigzag accent to it. The road leads through seven gates to the main gate Rampol (meaning Gate of Ram). On the climb between the second and third gate you see two Chattris cenotaphs built to honour Jaimull and Kulla heroes of 1568 siege by Emperor Akbar. The main gate of the fort itself is Surajpol (meaning Sun Gate). Within the fort a circular runs around the ruins of the fort.

According to often told legend the construction of the fort was started by Bhim a Pandav hero of mythological epic Mahabharata. The fort has many magnificent monuments. Akbar carried away all the distinctive pieces of architecture and sculpture and placed them in his capital. These are still manifested in the fort of Agra. Even though the fort is ruin but it is an overwhelming reminder of past history and its walls resonate with unbelievable legend of extra ordinary men and women and their equally astounding deeds.

Tour ends but sweet memories remains always. Please don’t hesitate to contact us or email us for any kind of travel inquiries for Udaipur and all Rajasthan.