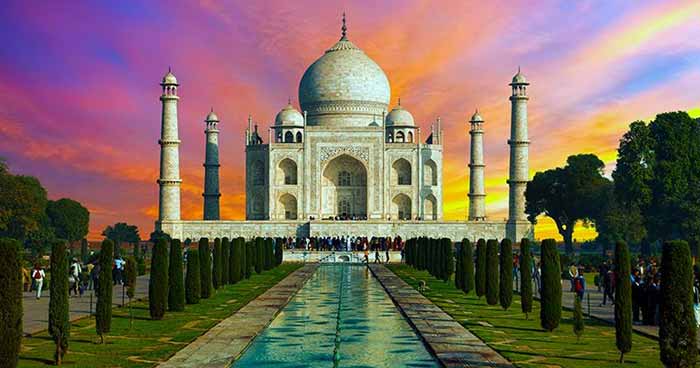 The Agra City Travel Tourism presents the impressive and inerasable past that still lives in evidence inside the prominent monuments spread across the city. The visitor stands in awe to see the majesty of the historical buildings, appreciates the exquisite form of arts and crafts, and enjoys the traditional culinary aspects that is more specific to the exceptional carry over of nostalgic traditions of the past. The Agra city has its chequered past. Founded by King Sikander Lodi it gained importance after the Mughals descended it in 16th century, and made it their capital. It was during the reign of Babar that many beautiful gardens were laid at the banks of Yamuna River. This period followed the reign of Akbar who erected the massive Agra Fort. The literary leanings of Akbar made Agra city the centre of learning of commerce and arts. Then followed the period when his son Jehangir occupied the seat of power. He was known for his architectural leaning that gives ample evidence in the form of monuments that he erected under his supervision. Later the city went on to suffer administrative erosion in the hands of the Jats and the Marathas when eventually it was taken over by the British in 1803. Agra still assiduously reflects its Mughal heritage.

The recent addition to cultural activities of the city includes Taj Festival that is held every year in the month of February. Many tourists throng from all over the world to attend the function. Thousands of tourists plan their vacation especially during this period to enjoy the hospitality at this Festival of Indian music and dance. The luxury and modern convenience have fine-tuned to co-exist with the tradition past. The narrow by lanes of older Agra city and the traditional bazaars have all smoothly juxtaposed with the present day luxury hotels, shopping malls and plazas having come up on the wide avenues. Every visitor to the Agra city carries the captivating fond memories back home.

Climate Summers are very hot and winters with chilling surface winds. The monsoon rains leaves the city for you to tread on very dirty roads. Plan your Agra trip between the months of September to March.

By air: Agra is on the popular regular tourist route Delhi/Agra/Khajuraho/Varanasi. Flights connect Agra to Delhi, Khajuraho and Varanasi.

By rail: All Express trains from Delhi, Mumbai, Calcutta, and Chennai halt at Agra.

By road: Agra is connected to Delhi, Rajasthan and other cities of Uttar Pradesh by an excellent carpeted road by car and bus service.